I was 43. I had three kids from my first marriage and my second husband and I had one darling, blond haired, blue eyed boy just a year old. We wanted just one more and not so secretly hoped for a little sister for our son. One just as “perfect,” one that would bring us all the pride and joy we could imagine. I pined for little tights, flowered dresses and bows.

It didn’t take long for us to get pregnant again – a tremendous blessing, the significance of which was not lost on us. We went to our first ultrasound appointment with every expectation that we would see our healthy baby growing. We also assumed that all would go much as it had the last pregnancy – smoothly and dodging all the “bullets” that we knew could potentially hit us considering my advanced maternal age. We had done it once, so had no reason to think we couldn’t do it one more time. And hopefully with lots of pink this time.

We received our first curve ball the first appointment. There wasn’t one healthy baby growing. There were two.

There was our first “bullet” that went along with being a pregnant woman over 40 - a higher possibility of multiples. We were simultaneously elated and terrified! On the whole we were excited to have some exceptional news to share with our families and laughed in disbelief about the ride we would be embarking on in several months.

Our ultrasound at 11 weeks began to show some markers that we were familiar with, having recently been through an over 40 pregnancy. We tried not to let the measurements showing the abnormally thick nuchal folds get us too concerned. But again, we knew very well the “bullets” we were hoping to dodge.

Next we chose to proceed with a new screening test that would tell us with remarkable accuracy if Down syndrome was present. We waited for the results with high hopes that we would receive a negative result and this would all just be a fire drill.

Down syndrome was present.

The next several weeks and one heart wrenching experience with amniocentesis confirmed our worst fears. Not just one, but both babies had Down syndrome. Oh. And they were both boys. Naturally. At this point, at least that was one small thing we could almost laugh about.

Those next several days and weeks were a swirling blur of pain, loss, tears, and waiting to awaken from this bad dream.

I just could not understand how or why this was happening to me. It was surreal. I wanted a way out so badly. What I wanted most was to turn back the clock and prevent it all from happening in the first place. Forget the tights, hair bows and flowered dresses. I tried for that and got something else entirely that I never, ever wanted. I could not imagine anything worse.

This all happened during a time when individuals with Down syndrome were just beginning to get more and more attention in the realms of social media, entertainment, and business. But it was salt in my wound to see a movie come out starring a young man with Down syndrome or read a story about a young woman with Down syndrome succeeding in her own business. Instead of providing me with hope and encouragement, these type of things just reminded me how I had never asked for this in my own life.

We contacted the NDSAN just to see what our options were. We wondered if there truly were families out there that we might feel comfortable allowing to raise our boys. Within hours we had profiles of several families - all of which seemed to be wonderful people who would be overjoyed to adopt our babies. Long before we felt ready to make a final decision, we found out that adoption was a very real option and began communicating with one particular family. As we got to know them we decided that if we went ahead with creating an adoption plan for the boys, this would be the family.

The pain and tug of war of the next several months was consuming. There was no escaping the feelings, the struggle, the fear, the pressure to make a decision. The joy of pregnancy - double joy of expecting twins - was all stolen because of the diagnosis we had received. We cancelled our plans for a big gender reveal party. No pink or blue cake and balloons. No plans for a baby shower. No frantic search for duplicates of all the baby items we would need. All of that was snatched from us. All the conversations I would have enjoyed having, I dreaded and tried hard to avoid. “When is your baby due?” “Are you having a boy or a girl?” “Oh my gosh, twins?! You are certainly going to have your hands full!” Normally this is an expectant mother’s favorite line of questioning and topic of discussion. To me it was a reminder of the pain and loss I was experiencing. Loss of the children I had imagined when we first discovered we were having twins. Loss of the future I had expected for them and for us. We had been thrust into a world of which we knew so little and that we had never had any desire to be part of.

As the due date approached, we felt more and more pressure to make our final decision. We did not want to leave the potential adoptive family hanging on unnecessarily. They had already been tremendously gracious to us, giving us time and space to consider and process all our feelings. They faithfully prayed for us and encouraged us and our friendship deepened even under such unusual circumstances.

We really believed ours was not a black and white decision. Adoption is a wonderful gift for everyone involved. For the child, it demonstrates that he is loved enough for his birth parents to seek out what is best for him even though it may mean such pain for the parents. For the birth family it can provide peace knowing their child is being placed into the arms of a family who loves him as much as they do. For the adoptive family it is the fulfillment of a dream to parent a child they may not otherwise be able to have. Therefore the decision was even more difficult because the answer was not cut and dry. We wrestled and prayed and discussed until we had no strength left.

The turning point for me was when I realized I needed to let go of fear. It was fear that was ruling my thoughts and trying to rule my decisions. I realized that I had been refusing to accept the gift I had been given of not just one, but two children who had been created to be exactly who they were supposed to be. We would likely face challenges we had not anticipated, but so often we experience great beauty in the midst of things that are difficult. We grow. We realize it isn’t all about us. We still didn’t know what life would look like raising the boys, but when do we ever know exactly how the map of our life is laid out? I also knew we would not walk our journey alone. Our faith promises us that we have a God that will never leave us or forsake us and our community shows us that we have friends new and old that will walk alongside us.

And so we stepped into the unknown. We called our friends to say the baby shower was a go! We frantically gathered up cribs, double strollers, matching boys’ clothes, car seats and diapers, diapers, diapers. The boys were born at 37 ½ weeks and I was instantly and forever in love with Charlie and Milo. I could not be more proud of who they are and I know they are here for a purpose. So far they have helped debunk myths about what Down syndrome is like, encouraged others to support adoption of children with Down syndrome, connected other families of children with Down syndrome with our local support system, and brought countless smiles to the faces of everyone they met. I can’t wait to see how else they will change the world!

I wish I could go back to pregnant me and share with her all that I’ve learned now. I wish I could take away all those wasted months where I struggled with pain and fear. However, I know I had to go through that valley. I had to experience that pain, grief and loss because it’s just normal. Life doesn’t always go the way we plan and when we receive a diagnosis we never expected, it rocks our world! I’m so thankful that NDSAN was there for us and our potential adoptive family as well. They gave us the permission to experience all the ugly feelings and to work through them.

At the end of it all we chose to keep our boys and welcome them for the gift that they are to our family. Not once have I thought we may have made the wrong choice. The moment we made our decision I knew it was the right one for us. Not that we haven’t had moments of sadness over the challenges we have – we do even now and I’m sure still will have those moments as the boys grow. However, my boys never do! They have no regrets about who they are! They are determined, energetic, goofy, incredibly smart, sweet little monsters! In so many ways they are much like any other child approaching age two – in good ways and not so good ways. You’ve heard of the terrible twos? When I notice their differences now they impact me less and less. No, neither of them are walking even though they will be two in just a couple months. Their only consistent spoken words are “kkk” (kitty) and “woof.” But they learn new signs almost every day and use them very clearly to tell us what they want to say. And you can see the wheels turning in their little heads. They understand so much of what we are saying and what is going on around them. They have super kissable cheeks. Their smiles light up the room and their laughs are the best sound imaginable. I have to remind myself every single day not to underestimate them. And when they hit a milestone that we have been working to achieve for a long time, you have never seen a more proud Mommy! Ever.

You can see just how Charlie and Milo continue to change the world here. 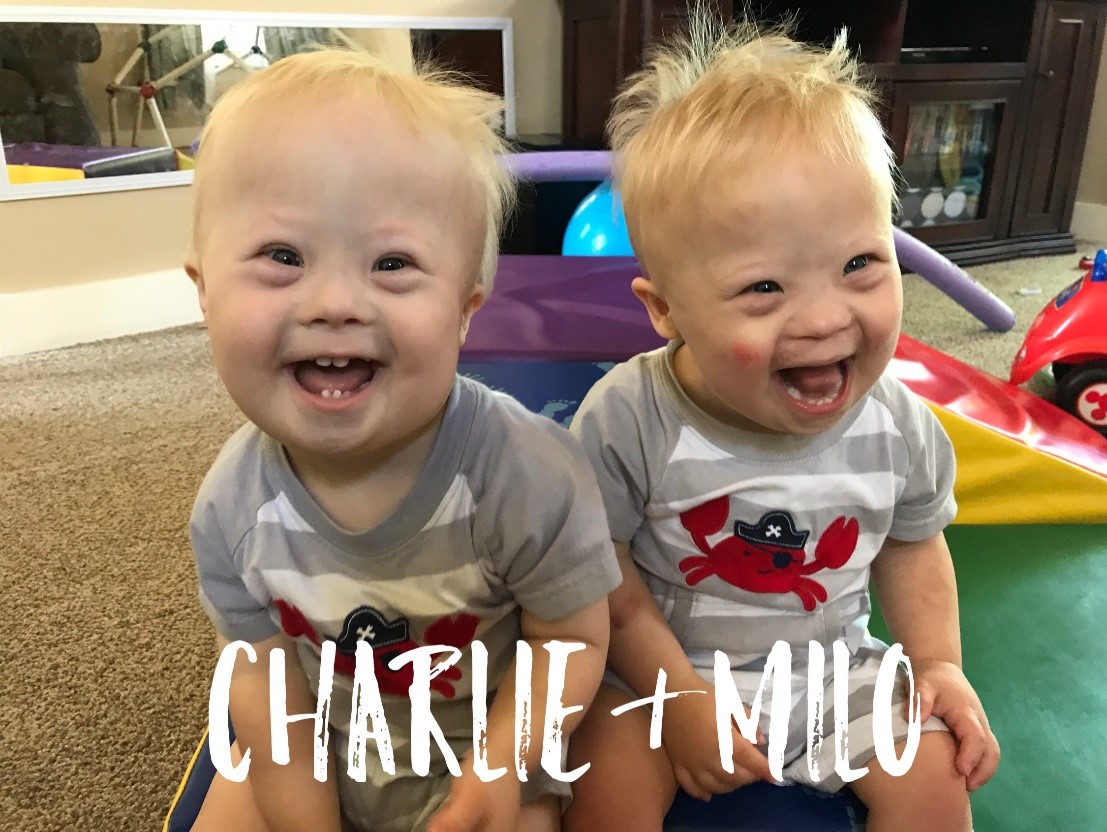